„A word, a smell, an image – and experiences become real again“

Since spring 2016 the Schwulenberatung Berlin (Berlin’s gay counseling center) has been providing emergency and communal accommodations for LGBTI [lesbian, gay, bisexual, trans and intersex] refugees. Jakob Prousalis is responsible for psychological counseling there.

Jakob, you have been a counsellor and psychotherapist for many years and have been specially trained to deal with trauma patients. How different is your present work in spite of all your experience? 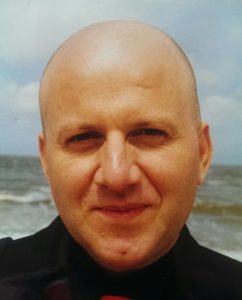 I have been working with traumatized refugees for a long time, but up until now I have only occasionally dealt with LGBTI refugees. Now I am working here in an organization that offers this safe space in which people can openly talk about homosexuality or transsexuality. I did not have this opportunity before. This is an important and solid basis on which to build.

So the working conditions are different, but are the stories you hear also different?

Life stories are always individual and different, and people are shaped in many ways: through family, society, education and much more. And, of course, refugees also each have different experiences. In the case of LGBTI refugees, homo- and trans-specific persecution often also play a role in the decision to flee in addition to fighting and civil war.

„Many experienced exclusion, torture or violence within their family for many years“

What have these people experienced?

The bond to family is very important for the psychosocial development of a person. LGBTI often experience a familial or societal rejection of homosexuality and transsexuality long before their own coming out. The secret knowledge of one’s own homosexuality or transsexuality and the fear of stigmatization lead to an emotional disruption of this bond. If, as a result of this, relationships are broken off, or a person experiences psychological or physical violence, one can speak of the first incidence of trauma. Many have unfortunately had to experience social exclusion, criminalization, imprisonment and torture, or violence within their family for years – in addition to the general warlike conditions in some countries.

How do you approach counseling?

First, I try to explain how I work. Many have no notion about my job. In some countries, for example, psychological counseling is prohibited or it is not LGBTI-friendly or accepting. There is a real risk that parents or the authorities will be informed by psychiatrists. Therefore, some people understandably have fears at the outset. At the same time, many have a strong need to finally talk about feelings and experiences in a safe environment. It is about building a trusting relationship – also through me showing them that they are accepted here as they are. The various offerings of the Schwulenberatung Berlin help to underline the reality of this acceptance; for example as a meeting point, and through its counseling and accommodations for LGBTI refugees.

„As soon as the body finds rest, the brain can remember“

What acute problems do your patients bring with them?

After the all too often traumatizing experiences in their families, countries of origin, on their flight and even here in Germany, they finally get a sense of security and can slowly relax more and more. As soon as the body finds rest, the brain can remember. The images can come back. In post-traumatic stress we speak of flashbacks, of reverberating memories. As a trigger it sometimes only takes a word, a smell, an image in order to remember. Then the bad experiences become real again, which can lead to panic attacks or anxiety.

How often does that happen?

Other psychological support service institutions for refugees and torture victims believe that 50% of refugees are traumatized. With LGBTI refugees the proportion may be significantly higher because of the additional persecution, even if there are not yet much data from therapy work to back this up. It is not necessarily a matter of whether they are traumatized, but that they are traumatized in complex ways. This complexity creates a predisposition – a tendency, a susceptibility – for other diseases.

What are the health consequences?

These can include psychosomatic illnesses such as migraines, abdominal cramps, paralysis or psychogenic seizures, all the way up to psychiatric disorders. There are also attempts at self-healing with alcohol and other illicit drugs or self-procured medicines. These are appealing because they initially help in forgetting. In such situations alcohol and drug prevention programs are becoming increasingly important, because attempts to heal oneself can also turn into an addiction. These are quite complex challenges, even for the mental health system in Berlin.

Is our mental health system prepared for this?

It is not sufficiently prepared to understand and provide for people with different cultural backgrounds. Professional language interpretation in the various languages is either not available or is not financed and is certainly not LGBTI-sensitive. And many psychotherapists still think that real psychotherapy is not possible through translation. Additionally, employees in the healthcare system often have to actively develop the trust of LGBTI refugees by showing their intent to provide support and an accepting attitude toward LGBTI – possibly over and over again. This is often because of bad experiences the refugees had with the healthcare systems in their countries of origin. It requires willingness and effort. This costs time which also means money.

„The complexity of a trauma only comes slowly to the surface“

How long does it take to deal with these traumas?

The whole complexity of a trauma comes very slowly to the surface. In each individual it is very different where and how it manifests itself. This depends on how vulnerable the person is, how they grew up and were socialized, what cultural and social ties they have. After the initial stabilization and after taking care of subsequent illnesses, which can take a long time, it is not always important whether the actual trauma is treated extensively. But trauma therapy care cannot be thought of without psychological support care. First of all it is about basic needs such as security, something to eat and a roof over your head. The possibility to become independent by means of a right to stay, a place to live and training or work are the next important steps to achieve further stability.

Thank you for the interview!

Apart from the emergency and communal accommodations for 122 people, the Schwulenberatung Berlin (Berlin’s gay counseling center) also runs a meeting place for LGBTI refugees – Café Kuchus at Wilhelmstraße 115. On Tuesdays and Fridays from 2pm to 6pm, you can chat with other people in a cozy atmosphere and get support and advice from the staff. The Schwulenberatung Berlin also offers counseling on asylum procedures and immigration law – in various languages and, if necessary, with the assistance of LGBTI-sensitive translators. Additionally every Friday the psychological counseling services offer open consultation hours from 3pm to 6pm in Café Kuchus. Find all the details here or via email: refugees@sbberlin.info

German version of this article

Informationsverbund Asyl e.V. (only in German)

Counseling and projects in Berlin:

Refugees at LesMigraS, a project of the Lesbian Counseling Centre Berlin

A guide for gay, lesbian, bisexual, trans and intersex refugees in multiple languages from the Schwulenberatung Berlin (PDF)

MILES, project „Homosexuals and transsexual refugees“ from the LSVD Berlin-Brandenburg (only in German)